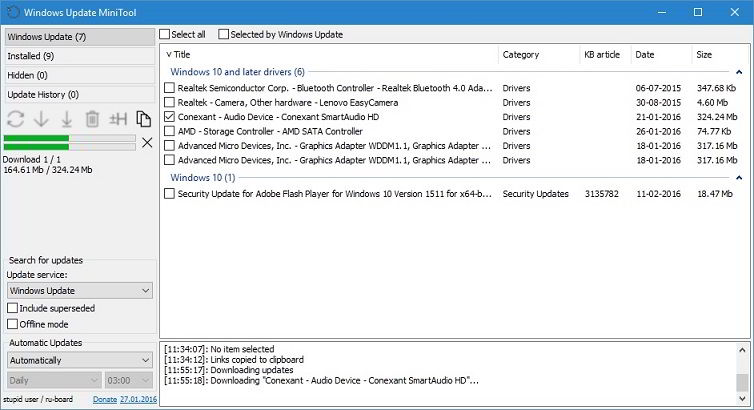 Although Windows OS comes with an inbuilt tool to upgrade system files or install patches, some users may prefer downloading updates manually when they are using a public or office WiFi or Ethernet connection. The WUMT (windows update MiniTool) freeware can be useful in such cases.

The MiniTool application checks if updates for the system drivers or Windows operating system are available or not. On the left sidebar, this freeware has a button to populate the dashboard with the list of updates available for the system.

If an update is available, the dashboard will display the below information:

Unlike the default Windows tool, WUMT allows you to choose the update you want to install. You can either download a file and install it later or update the system immediately after the file has been downloaded to your PC.

Although the user cannot pause downloads in WUMT, he can use the copy link to clipboard feature of the Windows update MiniTool to get download source link.

Once the link has been copied, you can use a third party download manager with pause and resume feature to download the file to your preferred location.

No matter what method you chose, the files will always be downloaded only from the Microsoft Windows servers.

The freeware makes you aware of the updates that were downloaded and installed in the past. It has a history section where you’ll find a list of the files you’ve downloaded with the mini tool.

The sidebar includes an option to change the Windows update service, configure the scheduler, activate the offline mode and check download progress. It also includes buttons to uninstall or hide an update. 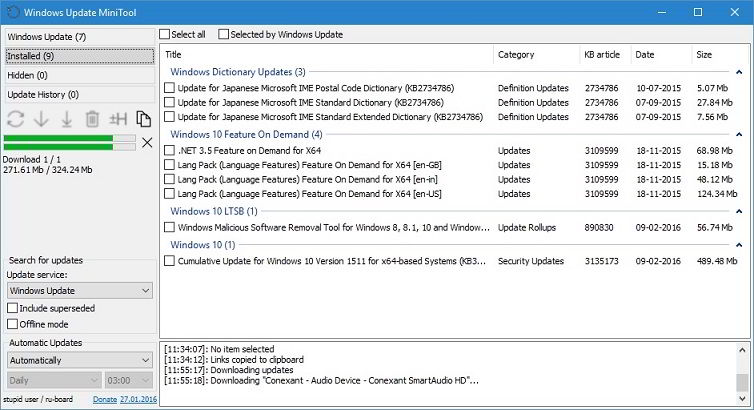 WUMT is a good application, but it has the below limitations and drawbacks:

The best way to get rid of the above errors is by downloading and installing the official Microsoft Windows Media creating tool. The WMCT software will download and install the latest Windows ISO file only if the OS on your PC is outdated. I used it last night to install the November update and other patches Microsoft had released for the Windows 10 operating system.

The freeware is useful not on only for downloading OS patches. Some third-party programs will check for updates only after you run them. If you would like to keep your PC up to date, you can use the free WUMT software. It works well with third-party drivers and applications.

Conclusion: Minitool is a simple application that handles the task of upgrading system and driver files well. It works on all versions of Windows. It is fast and lacks complex functions. This freeware uses low RAM. Thus, users can run it on a low-end computer. Because of its simple UI, the mini tool can be used by a novice user.