People are scared to death when the desktop suddenly turns blue and displays an error message accompanied with a hexadecimal code. This problem is called Blue Screen of Death aka BSOD. Microsoft Corporation has implemented the BSOD function in all the operating systems it has launched. It has been designed to make the PC user aware of a critical problem in the PC.

Below are the common reasons why your PC shows the BSOD error:

Hardware failure: If one of the vital hardware components in your PC has malfunctioned, Windows OS will not work. The OS will stop using the component to prevent further damages. It will also display the so-called Blue Screen error.

Corrupt system Drivers: A poorly coded system driver will not handle the hardware correctly. In such case, Windows OS might sense that the hardware component has failed, and it will show the BSOD error. The user must either rollback to the earlier version of the driver or update the drivers on the PC.

Not every user is a PC expert. When BSOD appears on the screen, the users must note down the hex code and use search engines to find a solution to the problem. They can also use the free WhoCrashed software. 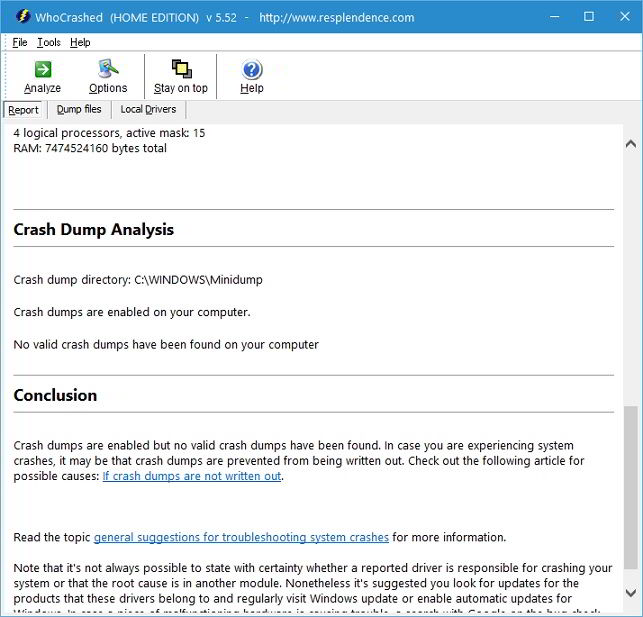 WhoCrashed is a free crash dump analyzer tool for Windows XP, 7, 8.1, 10 and 8 OS. It is a lightweight program that makes users aware of the malfunctioned drivers that are causing the Windows OS to display Blue Screen Of Death error.

WhoCrashed program flaunts four options on its toolbar. It has a menubar with three items – file, tools, and help.

If your PC had crashed, then click on the Analyze button from the toolbar. If you do, WhoCrashed will begin analyzing the crash dump files that Windows OS has created.

Once the program finishes examining the CD files, use the scrollbar of the WhoCrashed program to scroll down and go through the file analysis report.

The report will make you aware of faulty system modules. Navigate to the local drivers section on the main Window of WhoCrashed to get additional details on the driver.

The user must uninstall the reported driver with the device manager tool in Windows. Once you do so, restart the PC, the Blue Screen Of Death error should now be fixed. 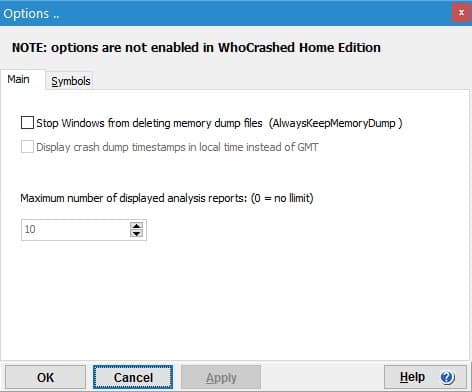 The user is allowed to export the analysis report to an HTML file. WhoCrashed tool for Windows has an options panel with which you can configure the program to:

The WhoCrashed software comes with a crash dump test tool. This utility will crash your system to check whether your PC can generate the crash dump files or not.

WhoCrashed Home Edition is free to download from resplendence.com website. The latest version is 5.52. If your PC keeps crashing and freezing at random times, you should try out this program.