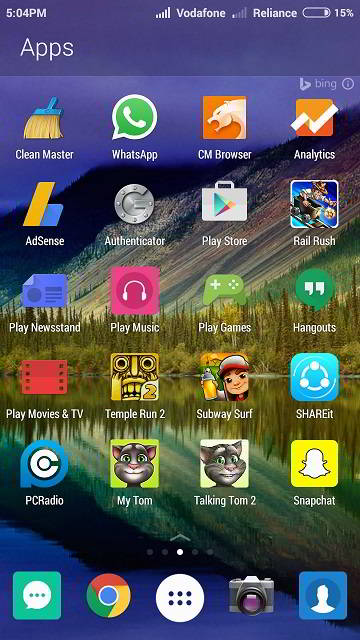 Arrow, the first ever Android launcher from Microsoft Corporation is now officially available on the play store. The beta version of the launcher was introduced a few months back, and it was being tested since then. It looks like Microsoft has fixed all bugs that were reported by the beta version of this app as a result of which the stable version of Arrow has been made available for all the Android users.

Arrow offers nothing new when compared with other top launchers such as EveryThingMe, GO-EX, Nova, etc. But it is lightweight and beautiful. It is an ad-free application which is easy to set up. Arrow will work on Android 4.0, 4.3, Lollipop and Marshmallow OS powered mobile devices.

If you’re curious to know how this free Android launcher app works, go through the below paragraphs where we have shared its review.

Once you install and run it, Microsoft arrow will ask you to select five most used applications so as to complete the setup. When you’re done with the app selection task, the launcher will run on your device.

Arrow, when enabled on your phone will split the home screen into five sections, i.e., People, Widgets, Notes/Reminders, Apps, and Recent.

By default, the Widget and the reminder page in Arrow launcher are hidden. You will have to unlock them if you want to add widgets and reminders to your home screen.

In the People’s interface, the user will find the contact numbers stored in the phonebook. Arrow allows you to call or send a text message to the contact through this interface.

Arrow launcher recognizes third-party dialer apps that are installed on your phone. When you tap on the call or message icon, Arrow will display the dialer applications that are active on your system. We’ve shared a screenshot that shows Arrows compatibility with TrueDialer and MIUI contacts.

The Recent section in Arrow launcher for Android will display your latest activities. For example, if you’ve recently captured a photo, opened an app, or dialed a number, Arrow will show it the Recent interface.

Reminder and Notes feature of Microsoft Arrow are easy to use. You can set alerts for it.

If you’re bored with the same old wallpaper, Launcher will update your home screen’s background with a new picture every day. To enable this module, open the launcher’s settings utility and tap on change wallpaper icon. Now, turn on the enable daily Bing wallpaper option. If you want this feature to work only on WiFi connections, ignore the “download images on WiFi module” option.

Microsoft Arrow launcher doesn’t offer plenty of customization options (As found in EverythingMe, Solo, Hola). But it allows you to download and use third-party icon packs from the Google play store.

If you’re in love with the Microsoft Arrow launcher, you can set it as default on your device through Android system settings. This app will display a small tutorial for the same. Hence, if you’re finding it difficult to replace the system launcher with the MS Arrow, follow the steps described in the tutorial.

Like most of the Microsoft products, Arrow launcher will send its performance report to its developers. To disable this module, turn off the Help us improve option from the settings window.