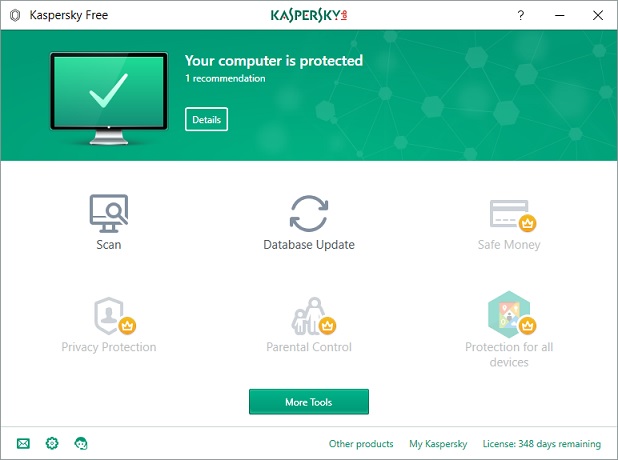 Windows OS users are targetted by viruses, malware, ransomware, and hackers more than any other operating systems. To safeguard the data, users must install a good antivirus software on their computer.

The AV program will run in the background and monitor the activities of executable files. If an antivirus software detects any abnormal activity on the PC, it will report the activity to the user. The antivirus will also fix the problem by deleting or repairing the file.

There are a plethora of free antivirus software available for download. Unfortunately, not all programs are good. Windows OS also has a built-in antivirus utility called Windows Defender. WD is a powerful program, but it doesn’t get regular virus database updates.

So, which AV program should you install and use? Well, you must use a security software from a renowned company. If you’re unable to find a good antivirus software, go through the below list.

Kaspersky had introduced the free version of its premium antivirus software in August 2017.

The free edition of Kaspersky antivirus is impressive, user-friendly, reliable and has 50+ million users. It uses the same engine as the premium applications of Kaspersky. The program gets new virus definition updates every day.

Kaspersky Free Edition doesn’t have a firewall utility. Frankly speaking, you won’t need the KS firewall because the Windows 10 firewall does a great job of blocking remote attacks.

Kaspersky runs in the background and identifies viruses, rootkits, malware on the PC.

Kaspersky integrates itself with the browsers installed on the PC and prevents users from accessing malicious websites. It makes users aware of websites employing incorrect SSL certificates.

Like the premium version of Kaspersky, you must enter the license code to use the free edition of Kaspersky. Kaspersky servers generate the code for free. You must follow the instructions displayed on the screen to generate one. The license will remain in effect for 365 days.

The software protects the PC from malware and viruses. Like Kaspersky, the free Avast antivirus software doesn’t include a firewall utility nor does it protects users from ransomware or phishing attacks.

Despite being a free software, Avast scores high in AV-test antivirus benchmarking tests. This is the reason why millions of Windows users trust and use Avast.

Apart from virus protection, Avast ships with a junk cleaner utility which finds useless files on the PC and helps users in removing them. The program also identifies WiFi security issues and makes users aware of them.

Like Kaspersky and Avast, BitDefender has launched a free antivirus program for Windows computers.

BitDefender uses the same scanning technology in the premium and free edition of its Antivirus software.

BD finds malware and viruses on your PC and it helps you remove them. The software supports full and partial scan operations. It also identifies threats on removable storage devices such as USB drive, external hard disks, etc.

The program protects the users from phishing attempts. It also makes you aware of scam websites. It includes an autopilot mode. When you enable this mode, BD will manage the security of the PC automatically.

AVG was the most popular free antivirus program before BitDefender, Kaspersky, and Avast launched their security products to take on AVG.

The software offers basic antivirus and web protection. It is easy to install. Because of its clean user-interface, AVG is easy to use.

AVG lacks the “Quick Scan” option which makes the program scan the system memory and important places on the file system to find threats. It supports “Full System Scan” operation which may take up to an hour to complete.

The free antivirus program includes a file shredder tool. In case AVG finds a malware or a virus, you can use this utility to get rid of it permanently.

Avira antivirus has a beautiful interface. It has the option to run full and quick scan functions. Avira can also scan a folder or partition of your choice.

According to independent antivirus benchmarking firm AV-Test, Avira is reliable software. It identifies and quarantines almost all viruses.

CLAM is a powerful open source antivirus software from Cisco Corporation. Unlike the above applications, CLAM has a command line interface.

CLI programs are a bit difficult to use. Hence, before installing CLAM on your computer, you must go through the program’s documentation.

Shadowserver had tested the performance of CLAM antivirus. The antivirus was subjected to 25 million samples. It detected 76% of threats.

Sophos is yet another top free Windows 10 antivirus software. Unlike the applications mentioned above, SH provides cloud-based protection.

When Sophos’s intelligent scanner identifies an unusual file on your system, it sends the file to the online scanner.

Sophos supports on-demand scanning. It identifies malware residing on your system and protects you from phishing attempts.

Users can configure Sophos to ignore specific file or folder during a scan operation. Sophos Home Edition antivirus has an ordinary interface.